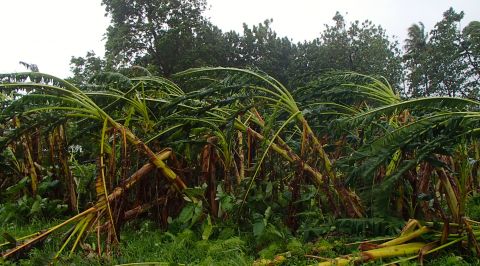 A number of families in East Malaita are homeless after strong winds and rain hit hard in that part of the country last night.

SIBC’s East Malaita stringer Enoch Idui reported, a number of houses were blown to the ground.

It was lucky he said, that no one was injured.

“Some families too were homeless because some of the houses were completely blown down last night. Today morning gardens were destroyed and people will run out of food due to heavy flooding at Kwaibaita river.”

He added, residents in the area will be forced to drink unhealthy water in the coming days.

Meanwhile in Russell Islands, Central Province two families are currently living in a makeshift tent, previously used as a kitchen.

SIBC’s stringer Tome Kiki reported, this came after last night’s strong winds and heavy rain which damaged their permanent home and it collapsed to the ground.

He said food gardens were also washed away.

In Guadalcanal, the Ngalibiu river in East Guadalcanal reportedly burst its banks and swept through the surrounding villages.

A Martin Fredrick from Veuru village told SIBC Online today, the flood swept into their village around 7am this morning.

He said there are no injuries reported at the moment but food gardens and a few homes have been inundated by the flood.

He added, as of this afternoon, the water level is decreasing but they will continue to monitor it.

Meanwhile at new Kolina settlement food gardens and cash crops have been completed destroyed by the flooded Betikama river.

The Solomon Islands Metrological Services issued its second ‘Special Weather Advice’ for the country at 1pm this afternoon.

It said as of eleven O’clock this morning, a tropical low with a Central Pressure of 1000 hectopascals was located approximately 96 Nautical miles East of Ulawa island, Makira Ulawa Province.

The Weather office said winds of 15 to 25 knots gusting up to 35 knots over most waters will be expected saying seas will be moderate to rough with moderate West to Northwest swells.

Heavy rain with squally thunderstorms over most provinces are also expected.

The Met Office warned, people in most provinces should take precautionary measure as bad weather associated with the Tropical Low poses threats to lives and properties.

The next update will be issued at 7pm this evening.

The National Disaster Management Office, NDMO, meanwhile, received reports of some damage caused by the current bad weather from parts of the country.

MID CALLED ON TO SCRUTINISE CONTRACTS BEFORE AWARDS