CHIEF CALLED ON PEOPLE NOT TO REBUILD NEAR RIVER 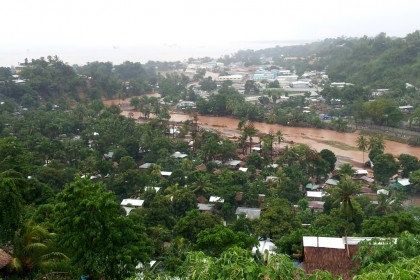 Residents near the Matanikau river as viewed from Skyline. Photo credit: SIBC.

A Barana Chief of Mount Austin has called on people in Honiara not to
build their homes on the banks of Matanikau river again.

Chief Joseph Manehamosa says he is making this call in light of the
recent flash floods that claimed homes and the lives of over 20 people
and children.

“Just a suggestion I want to put across for people living along the river, now they must see what has happened because this is the nature and not a person control, but where homes were lost is still the river bed. For that reason I want to tell people please do not build back where you’ve already lost your homes.”

The Barana Chief also called on the people residing along the river
to stop throwing rubbish into the Mataniko River.

“I want the river to be clean. People living in the town should now stop throwing rubbish into the river, so that we can figure out when the river may flood so as to help us live on higher ground or a safe location.”