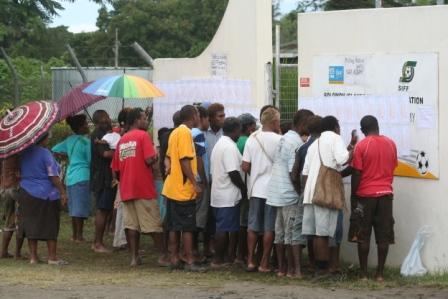 Polling materials for the Western and Choiseul provincial elections have been finalised and transported to the provinces over the weekend.

Director of Governance for the Ministry of Provincial Government and Institutional Strengthening and Coordinator for provincial elections Robert Kaua confirmed this to SIBC News.

“As far as preparations from Honiara is concerned it’s all well and done, we’ve finished it well in time. In the weekend all the materials should reach the Western and Choiseul provinces in time for the returning officers and the assistant ROs to further transport the materials right down to the polling stations in the wards in the two provinces in time before June 13th when the actual polling day will take place.”

“Yesterday a chattered vessel from Honiara arrive in Gizo and is now in Taro, Choiseul province. We’ve received the ballot papers and ballot boxes and we have distributed them”, Mr Piosasa said.

“For Marovo,we sent a boat yesterday with the polling materials and it has arrived back already.

He said they are now deploying the presiding officers and polling assistants to the wards.

“The weather right now in Western Province is not very good, so we are looking at getting additional boats. And money too is a challenge, but we will try our very best. While we are running this election, safety too is very important.”

Polling for the two provinces will start at 7am and conclude at 5pm on Wednesday.