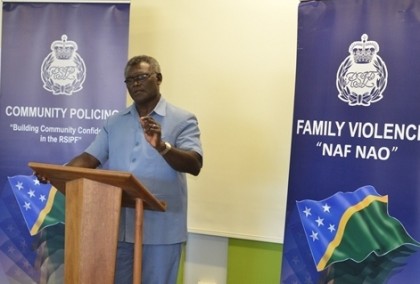 The National Conference is attended by Royal Solomon Islands Police Force (RSIPF) officers from throughout the country.

The one-week conference, organised by the RSIPF is being held at the RAMSI base in East Honiara.

Speaking at the Conference, Prime Minister Sogavare says family violence has a terrible cost on Solomon Islands society, both socially and financially.

The Prime Minister further stated Solomon Islands as a nation cannot sit by and expect this problem to go away by itself.

He told the Conference, the Government understands “this pervasive problem demands a strong response”.

He said this is why it is a Government priority “to strengthen and support gender equality, eliminate gender violence and stop the abuse of women and children in Solomon Islands”.