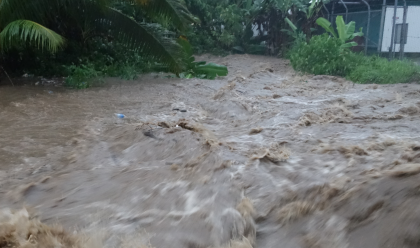 Flood waters in Isabel province has killed a man in his 50s on Tuesday this week while he was trying to cross the flooded Garanga river near Buala.

Reports reaching SIBC News yesterday confirmed the man was among few others who were trying to cross the flooded river when he was carried away.

“He was trying to cross the Garanga river without first predicting its dept and strength so the flood took him away and drowned him since they were unable to locate him amongst those who were trying to cross the river. A search was conducted, which later locate his body downstream of the river. Reports reaching us at the hospital confirmed that the person is dead.”

And in North Malaita, newly constructed culverts along the North Malaita road have been destroyed by flooding from heavy rain since Tuesday this week, preventing vehicles from reaching urban center Auki.

Confirming this yesterday, SIBC’s North Malaita stringer John Andrew Kiri said youths within the vicinity are trying their best to provide access by putting coconut trunks as bridges to allow vehicles to pass through.

He adds, with continuous heavy rain currently experienced more similar damages are expected to occur along the North road.

SIBC News understands businesses in Auki are operating normally while those in Honiara will close early today due to the current weather.

It is also understood that flights in and out of the country are closed as the international terminal is being used as an evacuation center for flood affected people within the Henderson area.