Gold Ridge Mining Limited (GRML) has been accused for discharging mining waste from the Tailings Storage Facility (TSF) directly into the river systems without prior treatment, and approval from Kolobisi Tailings Dams Association (KTDA) and Metapono Downstream Association (MDA). 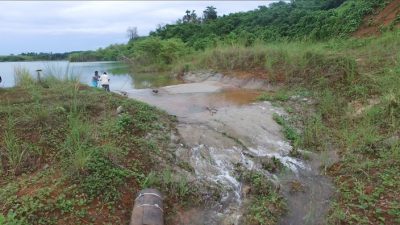 The two bodies representing communities in the area have rejected GRML plans to discharge mining waste without prior treatment, into the environment during all consultations concerning this.

“This is in accordance with the approved mining plan for management of the tailings storage facility under the existing mining lease agreement,” the statement signed by KTDA Chairman Primo Amusaea and MDA Chairman Samson Maneka, says.

KTDA and MDA condemn in the strongest possible term the national government through the Ministry of Environment and the Ministry of Mines approval of the mining company’s proposal for direct discharge, knowing fully what this may cause to the environment.

“The cyanide is 1000 times more lethal than Covid-19; national capabilities in terms of monitoring the short term and long term effects of cyanide contamination of the environment and potential impact on the lives and livelihoods of downstream communities at Gold Ridge and North Guadalcanal coastal communities are limited or even non-existent.

“But they chose to grant an untreated controlled discharge permit to GRML which gave the company the “legal basis” to undertake the discharge,” the associations states.

They highlighted that two recent incidents of discharges of poisonous mining waste has clearly shown that national capabilities in motoring mining operations are inadequate or non-existent.

(i) Construction of a channel in the TSF which resulted in the discharge of chemical waste into the river system in April 2021.

(ii) Discharge of cyanide from the Heap Leach facilities at the mining site which killed fish and prawns in the Chovohio river.

The statement said the Environment and the Mines ministries haven’t responded to these incidents.

“How are these responsible authorities expected to monitor GRMLs direct discharge under the Permit granted by the Ministry of Environment?”

Further, KTDA and MDA disassociate them from any suggestion that both of them have been given approval of GRML to discharge cyanide and other poisonous chemical waste into the river systems without prior treatment.

The associations inform the public that the management of GRML in collaboration with individual in the responsible government ministries has continued to provide untrue and misleading information to misinform the public about them.

They call on both domestic and international environment and human rights organisations such as UNDP and WWF for technical assistance and advise to counter the misinformation campaign currently being conducted by GRML and its supporters in the Government.

This is in regards to the financial and environmental safety of the GRML operations and other Mining operations in Solomon Islands.