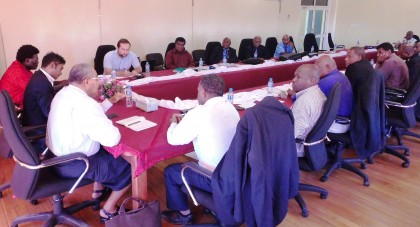 Premier Anthony Veke brought before the Assembly an executive resolution in the form of a motion to be debated by the full Assembly.

The Guadalcanal Province will advance its intention for the independent Sovereign State of Guadalcanal.

The motion was passed, reflecting the seriousness of the Assembly on behalf of the people and land of Guadalcanal.

In his introduction, Premier Veke reminded the Assembly about the calls by past and present Guadalcanal people for Federalism.

The premier said these calls are well documented in the Bona Fide Demands of the Guadalcanal people, 1998 and 2000 and also within the Guadalcanal Leader’s Summit Report 2005, GPG Taskforce Report 2005/2006 and the High-Level Government Committee (HLGC) report of 2007.

Meanwhile, Premier Veke said the cracks of the matter is Autonomy or self-determination for his province.

He explained, the provincial government resolution is not discriminating and NOT intended to prevent people from other provinces coming into Guadalcanal.

Premier Veke clearly states Guadalcanal province is not against the intentions of other Provincial governments’ to pursue their own indigenous governance system and to go fully independent.

A Guadalcanal Leader’s summit will be organised soon following the successful passing of this motion in the Assembly.