In Sports, the National Futsal team, Kurukuru Captain Elliot Ragomo is in high spirit as training intensifies at the Dural Baptist Church in Sydney, Australia.

Meanwhile, Waimora reports Captain Ragomo believes, the boys spirit has been boosted by the varying levels of physical and mental preparations in Sydney.

Mr. Ragomo adds, his side’s advantage is training on an official Futsal facility and exposing their talents in a World cup standard court.

The Kurukuru boys will be back in the country a few weeks from now. 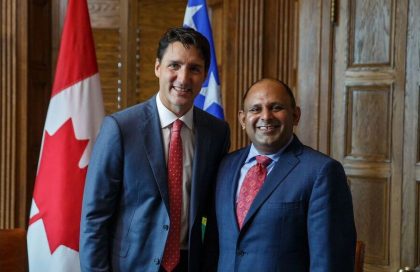 Prime Minister of Canada, Justin Trudeau with Ashwant Dwivedi. Photo: PMO, Canada Another Solomon Islander from Guadalcanal will be heading to Canada to work. ... Read More