The National Meteorological Services has begun issuing heavy rain alerts to almost all islands in the country.

Mr Hiriasia said the heavy rains is due to the monsoon trough active in the country and some places will experience heavy rain at times this week.

“We are expecting rainfall to pick up, might be heavy at times in certain places as we move into the week and as the system develop or intensifies. And currently winds at the Southern parts or the areas within the Northern Coral seas are starting to pick up as well and so we are also monitoring the wind as well as the rainfall”.

Meanwhile, the Met Director said people must keep up with any further alerts from the Met Office, through the media.

“And so it is important that people listen out and follow advises where the Met Service and our colleagues from the National Disaster Management Office will continue to issue for the safety of the public, so it’s important that during this week we listen to SIBC especially those of you in the provinces and if you’re around in the urban areas where you have access to newspapers, we are issuing out the same message through newspapers in the country”, said Mr. Hiriasia 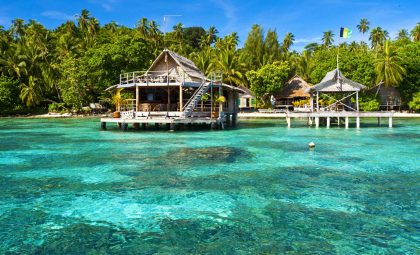 A typical tourism destination in the Solomons. Photo: SIVB. International visitation to the Solomon Islands is up this quarter. Visitation rose by 29 percent ... Read More