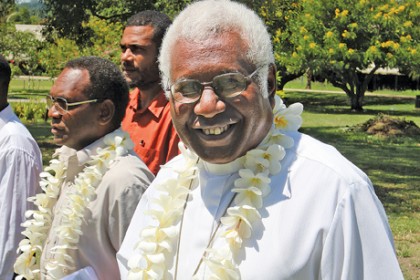 Archbishop of the Anglican Church of Melanesia the Most Reverend David Vunagi. Photo credit: http://www.anglicannesw.org

Archbishop of the Anglican Church of Melanesia, the Most Reverend David Vunagi has congratulated the 50 members of Parliament for their recent election victory.

Most Reverend Vunagi told SIBC News today nation also pray for the MPs as they lead the country for the next four years.

“As our new members of parliament are in Honiara now in preparation for the important task of electing our new Prime Minister, I wish to extend my belated congratulation to each and everyone of them. As a nation we give thanks to God for their victory and election and we assure them of our prayers as they lead this nation during the next four years.”

Archbishop Vunagi calls on the MPs to use their God-given judgement as they prepare to elect the country’s next Prime Minister.

He says this is important as constituents believe in their leadership abilities to put the interest of the country first rather than their own.

“But as they prepare to elect our new Prime Minister our prayer is that they will put the needs and welfare of our nation as their priority and allow reason and conscience to rule than emotion. They are elected because people respect them and because they are people of integrity, so they must not succumb to bribery and corruption.”

SIBC News understands, the new MPs are now in Honiara for the election of a new Prime Minister.

The Ruavatu school billboard. Photo: Courtesy of panoramio.com Ruavatu Catholic Parish in Northeast Guadalcanal celebrated the feast day of the Assumption of Mary over the ... Read More

A map of Santa Isabel. Photo credit: www.quickiwiki.com More than 30 women of the Yandina Anglican Parish have successfully completed their tour to West Bugotu ... Read More