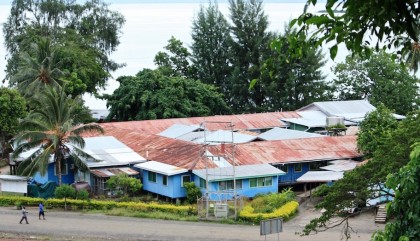 The old Gizo hospital has engulfed in flame late this afternoon.

SIBC’s Sina Adrian who witnessed the building disappear in flame says the situation was one of despair as the only firefighter in Gizo could do nothing to save the building and its valuables.

He adds, the fire quickly razed through the building’s main structure leaving the Gizo hospital authority million dollars in losses.

Mr. Adrian sends us this report from the scene earlier on this afternoon.

“The fire is still fresh I think for five to six minutes there were explosions coming from burned building I think from gas bottles and other things so it scared the public off the burned building. There’s nothing to do with this building but just to see it went up in flames this afternoon.”

Meanwhile, Gizo Police has confirmed, a mentally retarded man is in police custody in relation to the fire.