For the first time, Pacific Island Forum (PIF) Leaders have called on the UN General Assembly (UNGA) for an advisory opinion on climate change and human rights from the International Court of Justice (ICJ), a result of an ongoing campaign led by the Government of Vanuatu and supported by a global alliance of civil society groups. 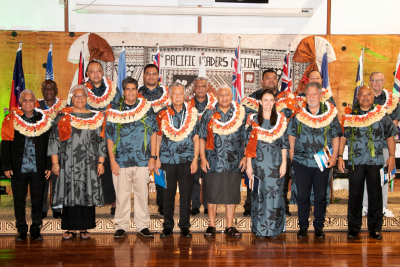 The support from Pacific leaders was part of the  51st PIF Leaders Communique 2022 released following last week’s leaders meeting in Suva, Fiji. Civil Society Organisations welcomed the decision and stated that this must begin a global groundswell of support ahead of the UN General Assembly in September.

The “Leaders called on the UN General Assembly for a resolution requesting the ICJ to provide an advisory opinion on the obligations of states under international law to protect the rights of present and future generations against the adverse impacts of climate change, and looked forward to close collaboration in the development of the specific question to ensure maximum impact in terms of limiting emissions to 1.5 degrees, including obligations of all major emitters past, present and future.”

The leaders commended Vanuatu on its initiative on a pathway to secure a request from UNGA for an advisory opinion from the International Court of Justice (ICJ) to clarify legal consequences of climate change, noting the urgency of the climate change threat and the need for accelerated global climate action and implementation of the Paris Agreement.

They welcomed progress since the initiative was reported to, and noted by, Forum Leaders at their 50th Meeting in Tuvalu in 2019, including progress on ongoing international and regional consultations on the initiative and related legal question(s) to be developed through the UNGA process, and noted that the initiative is consistent with, and complementary to, regional efforts and ambitious actions on climate change to safeguard “our” people against the adverse effects of climate change, and noting that an ICJ advisory opinion is non-binding but may change the course of current negotiations and boost commitments.

“Leaders reconfirmed that climate change remains the single greatest existential threat facing the Blue Pacific, underscoring the urgency to limit global warming to 1.5 degrees through rapid, deep and sustained reductions in greenhouse gas emissions. In this respect, Leaders declared that the Pacific is facing a Climate Emergency that threatens the livelihoods, security and wellbeing of its people and ecosystems, backed by the latest science and the daily lived realities in Pacific communities.”

Green Peace in a statement on July 18 said, the campaign for an ICJ advisory opinion is designed to provide an international legal framework for those experiencing the worst of the climate crisis to affect broad, accelerated change. It was led by the Government of Vanuatu and supported by a global alliance of civil society groups, representing more than 1,500 civil society organisations in 130 countries.

“The campaign is in response to the human rights crisis caused by climate change, with hundreds of millions of people in vulnerable countries having their livelihoods, housing, food, water, sanitation, healthcare and the environment severely impacted,” it said.

Pacific Islands Students Fighting Climate Change campaigner, Vishal Prasad said the endorsement from PIF leaders is a major step on the campaign’s voyage, which would help create a global groundswell.

“Pacific leaders have grasped the opportunity to help change the course of climate justice for the Pacific and around the world,” Mr Prasad said.

Pacific Leaders have also declared a Climate Emergency facing the Pacific, committed to a regional goal to achieve net zero by 2050, fully supported Australia’s proposal to host a United Nations Framework Convention on Climate Change (UNFCCC) Conference of Parties (COP) in the Pacific together with Pacific Small Island Developing States.