The staff of the Honiara City Council living in the Kukum labour line now have proper sanitation facility.

The sanitation facility was officially completed and handed over this week.

The building constructed by the D2 construction has two separate blocks for males and females with shower rooms and toilet facilities.

In a brief handing over ceremony, City Clerk Charles Kelly says it was worth the value of the money spent on the construction of the much-needed building block.

Meanwhile, Mayor Alfrence Fatai urged all his staff living in the premises to take good care of the facility, he is glad that they have solved one of the longstanding issues in terms of staff welfare. 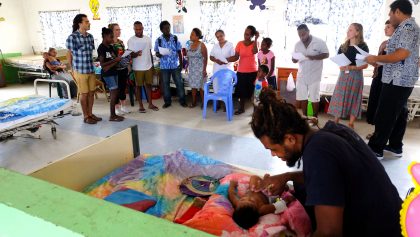 Sterry Lenny with his baby Ellen, enjoying the singing yesterday. You could not wipe the smile off her face. And though Miriam Kelesi - one of ... Read More