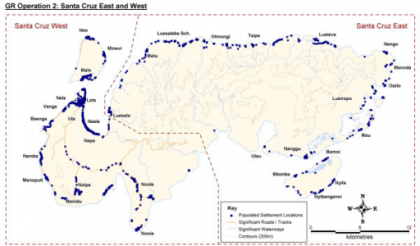 Hon Tau has announced his resignation last week from the Premiership post in the Temotu Provincial Assembly.

A Nende Constituent Mr. John Chris said, the people of Santa Cruzwant Hon. Tau not to undermine people’s legal rights over their resources.

“They are calling on the Temotu Premier Hon. Buddley Tau to return to Lata to sort out the mess he left behind. With what he has done, he is disregarding and undermining the legal right of the people who own the land in Santa Cruz.”

The former Premier is reported to have made a deal allowing the Xiangling Timber SI Limited to fell logs on the island without his executive’s approval.

A protest at Gold Ridge Mining recently. Photo credit: Ramu Mine. Landowning groups of the Gold Ridge Mine are demanding the termination of the Fiji ... Read More

Logging in the Solomon Islands. Photo credit: SIBC. Landowners of Wairaha in West Are'are have burned down and stoned machines belonging to the Burwood Logging ... Read More