A hat-trick from Paul Francis helped the Solomon Islands to a comfortable 6-0 win over American Samoa in the opening game of the OFC U-19 Championship 2022 in Tahiti. 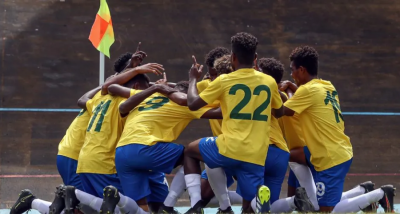 Solomon Islands U-19 celebrate one of their goals over American Samoa U-19 at the OFC U-19 Championships 2022 in Tahiti. Photo credit: OFC Media via Phototek.

Alden Suri scored a brace while Barrie Limoki also found the back of the net as Jerry Allen’s side enjoyed a perfect start to their campaign.

American Samoa did their best to frustrate Solomon Islands early on, with goalkeeper Penieli Atu even denying Limoki from the penalty spot .

However, the Solomons soon took a deserved lead, Francis scoring the opening goal of the competition and he doubled his team’s advantage shortly after, sweeping home after good work from Limoki.

Alden Suri then stretched the scoreline to 3-0, cutting inside to place a left-footed finish beyond Atu, just before the first-half drinks break at a warm Stade Fautaua.

A refreshed American Samoa then tested Solomons keeper Junior Petua, Kelvin Seong’s header forcing a comfortable save, before a well-placed header from Limoki made it 4-0 at the interval.

American Samoa stopper Atu made some smart stops to keep the Solomon Islands at bay in the opening stages of the second-half.

However, this resolve was eventually broken by Francis’s hat-trick goal before Suri bagged his second goal, finishing off a great run from Junior Rocky, to make it 6-0, which is how the scoring finished.

Solomon Islands will now look to continue their winning form against the Cook Islands while American Samoa will look to bounce back against New Zealand, with both games taking place on Saturday, September 10. Solomon Islands U-19 6 (Paul FRANCIS 17′, 26′, 67′ Alden SURI 28′, 70′, Barrie LIMOKI 40′)

BE VISIONARY AND SENSITIVE, MAPULI TOLD PARTICIPANTS OF 2014 DFC