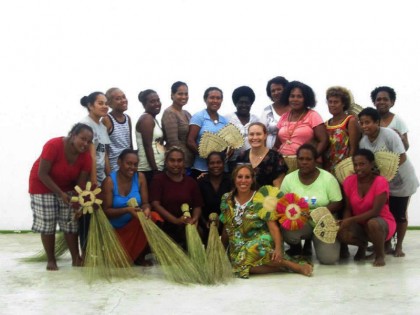 A group of Solomon Island theatre actors will be taking their message on peaceful homes to other parts of Melanesia this weekend.

Six female members of the Stages of Change theatre group will fly to Fiji this weekend to conduct a workshop with performing students at the Oceania Centre.

The workshop is in preparation for a VIP performance to the government and diplomatic community.

The theatre piece does not have a narrative but Ennie Sisia Bakale, a member of the group, says they are confident that people in Fiji will understand the theme and messages about violence against women.

“Like Solomon Islands, Fiji is also facing the same problem of violence against women so that’s why we will perform it to help the women and men of Fiji help to stop this violence.”

Funded by the European Union, the women have formed their own NGO and are being funded by UNDP in Fiji along with the British Council.

The group have already performed in Samoa and Papua New Guinea. After Fiji, the theatre group will head to Brussels to perform at an international conference on development.