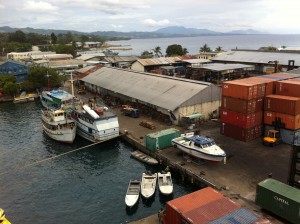 Chairman of the Worker Union Tony Kagovai, in a statement today said these are the two fundamental issues which should be the prime objectives of the Ports Authority Board and Management and WUSI is prepared to support and cooperate where and when necessary.

Mr. Kagovai made the pledge after 220 out of a total of 227 waterside workers at Honiara and Noro Ports voted in a secret ballot in support of becoming members of WUSI, while only six workers voted against the membership.

He said WUSI first applied to the Ports Authority for recognition on September 9th last year after 220 of its workers voluntarily signed WUSI check-off forms to be its members.

Meanwhile, the statement said the former acting CEO not only refused to grant recognition to WUSI as the legal representative of the workers but also totally refused to deal with the Union.

But Mr Kagovai said it was not until the workers of the Ports Authority issued a strike notice and the new CEO arrived that arrangements were finally made to hold the secret ballot.

He adds that the Union is prepared to cooperate with SIPA’s management for the common good of the company and its employees.

The WUSI Chairman said close cooperation between employers and unions on behalf of their members was possible and in the interest of both parties, which is the only way forward for both the workers and their employers.