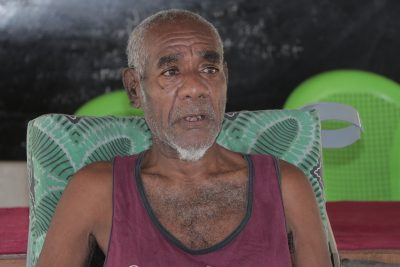 The Paramount Chief of Tadai has called on Mr Manenivaka Reuben to consult the Ghaobata House of Chiefs and come forward and have a dialogue with the Tadai House of Chiefs to reach peaceful means on claims over Honiara’s foreshore.
This came after Mr Manenivaka claimed that the Tadai House of Chiefs has no right to deal with lands within the Honiara township from KG to White River; whether it is above or below the high-water mark.
“I would like to call upon Mr Manenivaka to call upon his House of Chiefs, the Ghaobata House of Chiefs so that they come forward and we reach some resolution on his claims.
“So that we reach peaceful means on these land issues, and not over any forms of media, there are legal means we can do that,” Paramount Chief Francis Perogolo said.
Chief Perogolo said before the “Deed of Conveyance’ (or sale) in late 1800s that Mr Manenivaka talked about, the Tadai (not Tandai) people already settled here at Naghoniara (Honiara) area.
“Lengo people just came to witness the Deed of Conveyance but the truth is that the land is owned by Tadai people. The word Tadai is not a Lengo language as Mr Manenivaka claimed, it’s a word in the Garia language,” he told SIBC News in an interview.
Chief Perogolo said the Tandai region is from Mount Austin to Kakabona. Language wise, Tadai people speak Garia language which is totally not Lengo language.
“You cannot own seafronts if you migrate here by sea. Every land, including the foreshore, belongs to the people who came inland,” he said.
The head of the Tadai House of Chiefs said one cannot claim ownership over the land where people have already lived before the Deed of Conveyance’ (or sale).
However, the Paramount Chief reiterated that it is not good to argue over this in the media
“If he insists that he has ownership right over this land, we request him to come forward and we talk about it,” he said.
Paramount Chief Perogolo said there are plenty of land sales that occurred during the British and Colonial time by certain individuals from Lengo who were signatories. But he said after they sold the land, they returned to Lengo.
He added the Tadai House of Chiefs is a registered land-owning legal entity which has its constitution, structure and by-laws.
“So, if they really insist on this, come to the House of Chiefs so that we will sort it out and put things right – but it must have to be on the legal side. We are waiting for them,” he stressed.
Chief Perogolo said most of the names in Honiara including names of streams, rivers and hills around Honiara are not in the Lengo language.
“These names are all in the Garia language which are spoken by the Tadai people,” he said.
Backing this stand, Tadai House of Chiefs General Secretary Daniel Donua said their rightful ownership over Honiara foreshore can be justified by the fact that they were the signatories of the Coral Sea under sea cable with Solomon Islands Government.
J 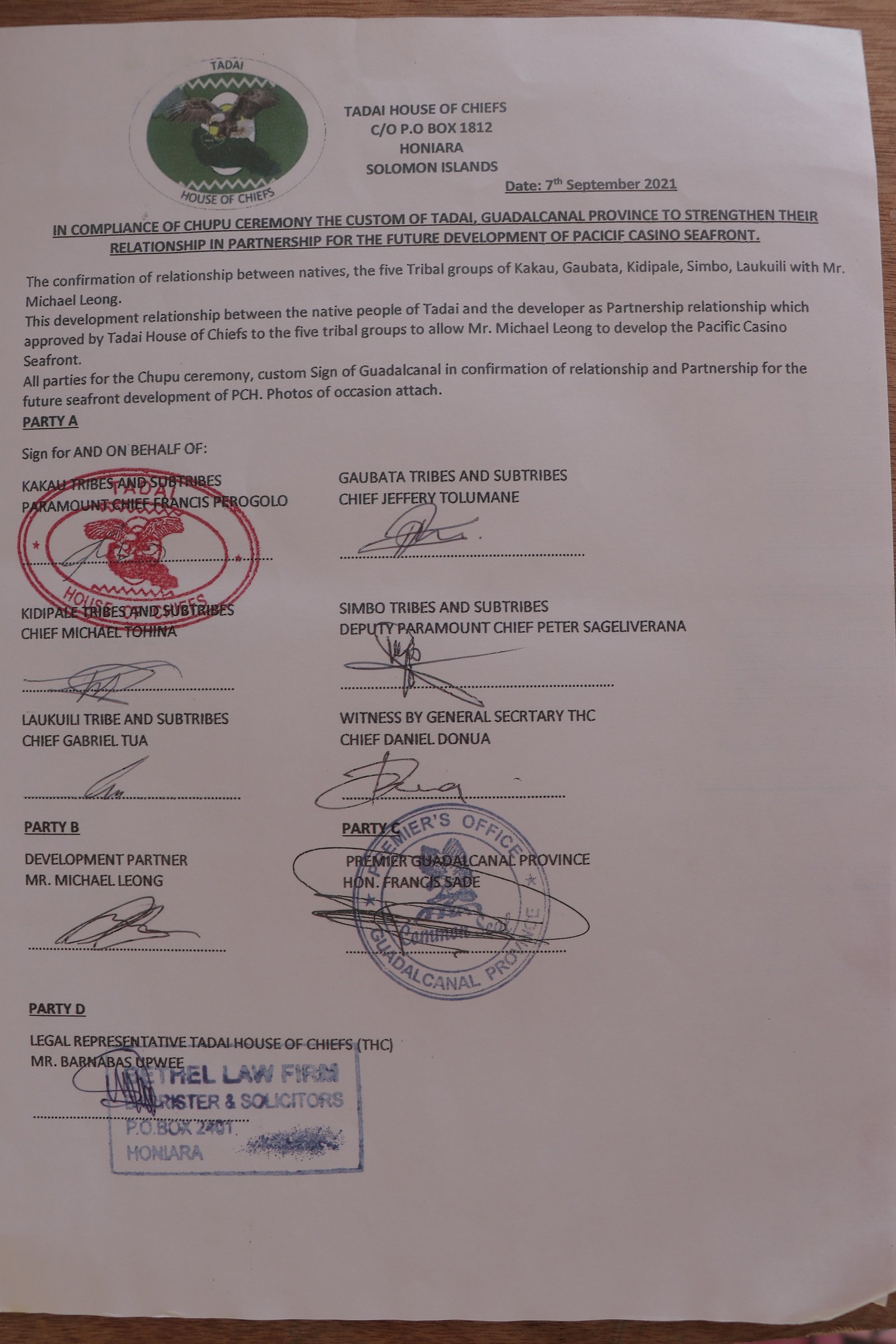 “We also signed a partnership for the development of Pacific Casino Hotel seafront, as well as with the Solomon Ports for the current development of the jetties at Point Cruz,” Donua said.
Last week a native of Tathiboko in the Lengo region of Guadalcanal, Manekanivaka Reuben said the Tadai House of Chiefs can deal with lands westwards beyond Tanaghai but not within the bounds of Honiara Township.
“Honiara City lands and its surrounds were once part and parcel of Ghaobata. It was not until the political boundary came that it was demarcated,” Mr Manenivaka said.
Mr Manekanivaka based his argument on the Deed of Conveyance, which he stated: “The descendants of the original vendors are still alive and around to claim the ownership of Honiara.” 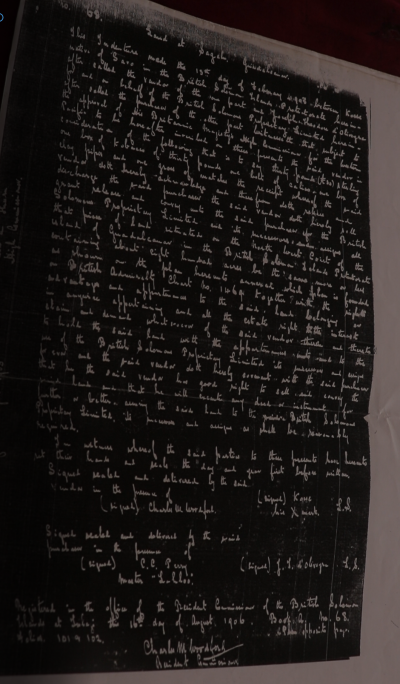 This was after the Tadai House of Chiefs met and concluded that all companies and businesses operating along the Honiara seafront must sign a Memorandum of Understanding (MOU) as a prerequisite to develop the seafront.
Secretary General Mr Donua said although these companies are under some lease arrangements, these agreements were not recognised by the Tadai native people who are the customary owners of the Honiara foreshore, below and above the highwater mark.
On Tuesday August 24, they met with senior executive staff of the Solomon Islands Ports Authority (SIPA) to pave a way to establish the MOU with them on this matter.
Solomon Ports Chief Executive Officer Eranda Kotelawala in response to queries by SIBC News said they will present the MOU proposal to the board for deliberation.
“Solomon Ports respects the customary rights and claims of the Tandai House of Chiefs. However, we are governed by SOE Regulations, which the management will present this matter to the board for deliberation.
“Once an update is given by the board then we will present it to the Tandai House of Chiefs,” Mr Kotelawala said in a statement.
Meanwhile Mr Donua said this will be an understanding of partnership with the state-owned enterprise, so that SIPA can have some recognition for the native people on the use of seafronts.
He said since 1975 there was no such recognition and this is a way forward for SIPA to have an understanding with the native people.
“We are not talking about the land because the government has already acquired it, we are talking about the sea highwater mark because it is customary owned by Tandai native people.
“The foreshore, below and above the high watermark is customarily owned by native people,” Donua said.
by Jared Koli
CATEGORIES Guadalcanal ProvinceLand IssuesPeopleTop Headlines
TAGS GuadalcanalLand issuesTandai
Share This