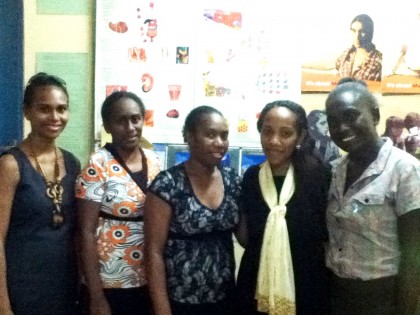 The Parliament Media Unit said the young women took the step campaigning against cervical cancer, with the theme ‘Fight Like a Girl’.

The young women took the step to do the test and decided to go public about it.

Sexually related diseases are usually frowned upon and are not something that is openly discussed. Women find it embarrassing and are ashamed to come forward to take the test.

A member of the group said she was not mentally ready for the test, which she described as awkward, embarrassing and excruciating.

But she said when it is done one has the assurance of being an ambassador to advocate young women like herself to be aware of the fatality of Cervical Cancer.

According to a nurse working at the SIPPA clinic, the group’s test results should be made available to them around November or December this year.

Meanwhile, YWPG Advisor Ms Marisa Pepa said they are hopeful to work with the new government through the Ministry of Health and Medical Services to ensure the process is quicker to avoid any unnecessary delay.

KIRAKIRA HOSPITAL SOON TO HAVE OWN WATER SOURCE