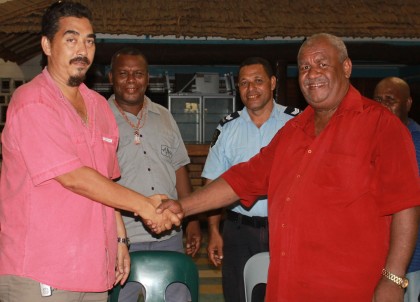 A reconciliation dialogue has taken place between the MP-elect for North West Guadalcanal Bodo Dettke, and the constituency’s loosing candidate Albert Fono.

SIBC Stringer in West Guadalcanal, John Toki reports supporters of both the New MP-elect for North Guadalcanal Bodo Dettke and his runner up, Albert Fono have not been on good terms since the general election.

Toki reports, the reconciliation talks was to put aside all political differences from the supporters of the two sides that emerged during and following the national general election.

Toki says, the reconciliation agreement was made between chiefs to maintain the tradition and culture of Guadalcanal province.

He also reports, a formal ceremony is planned to be held in two weeks between the tribes of Sahalu and Tandai, which will include
presentations of chupu and traditional money.

MARINERS & PUBLIC TO BE CAREFUL: RSIPF

FULL LIST OF CANDIDATES TO BE PUBLISHED THIS WEEK : S.I.E.C