Solomon Islands ranks first in hepatitis B infection in the Western Pacific region. The potentially life-threatening liver infection stands at twenty percent in the country, and is the sixth most common cause of death at the National Referral Hospital (NRH). 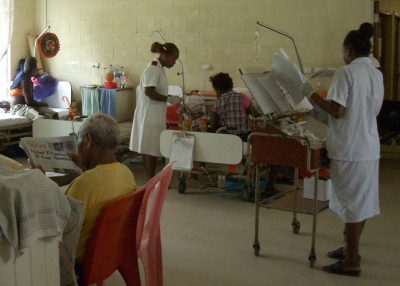 This is according to the director of the HIV and STI Unit in the Ministry of Health and Medical Services (MHMS), Dr Jackson Rakei.

“Approximately one out of five people walking in the streets have hepatitis B, which means about sixty thousand people in the country have hepatitis B. That is like the population of Temotu and Makaira added together,” Dr Rakei said during the World hepatitis B Day radio program via the national broadcaster – SIBC, over the weekend.

He said hepatitis C stands at one percent.

“Hepatitis B is the sixth most common death at the NRH and liver cancer ranks as the fourth most common cancer in the country,” he adds.

Dr Rakei said in efforts to have the country’s hepatitis B cases reduced, the MHMS has recently added the hepatitis B program into the HIV/STI national strategic plan 2019-2023 which developed with the support from WHO.

“In bringing hepatitis B care closer to the people, the ministry is focusing on upgrading health services in Honiara, Guadalcanal and plans are now in place to rollout the program to the provinces.”

Plans are also in place to train Honiara City Council and Guadalcanal medical officers in the next coming months.

Hepatitis is basically the inflammation of the liver and referred as yellow fever by many in the country.

According to WHO Hepatitis B virus (HBV) is transmitted through exposure to infective blood, semen, and other body fluids.

HBV can be transmitted from infected mothers to infants at the time of birth or from family member to infant in early childhood.

Transmission may also occur through transfusions of HBV-contaminated blood and blood products, contaminated injections during medical procedures, and through injection drug use.

This may happen through transfusions of HCV-contaminated blood and blood products, contaminated injections during medical procedures, and through injection drug use.

Sexual transmission is also possible, but is much less common. There is no vaccine for HCV.

Dr Rakei said Hepatitis B vaccine is administered in the country.

As of next year, health care workers will also be vaccinated against hepatitis B due to their exposure to the virus at their work place.

Dr Rakei adds the TENOFOVIR medication has been procured to treat hepatitis B last year, and it is now included in the National Essential Medicine List.  He said the government will continue to procure the drug on annual basis.

“Treatment is taken for life to achieve a healthy and long productive life and to suppress hepatitis B virus to undetectable level,” he said.

Dr Rakei calls on all persons to get tested for hepatitis B so they know their status and receive treatment early.