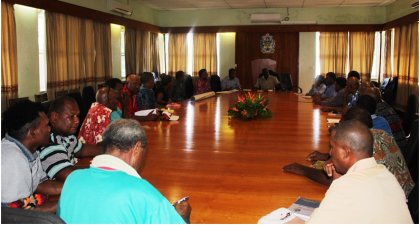 PM Sogavare (at the top end of the table) in discussion with the Harifafa delegation. Photo credit: OPMC.

Prime Minister Manasseh Sogavare has reassured Harifafa delegation from the proposed international seaport site at Suafa Bay, Malaita Province of his government’s commitment to kick off the national project.

A Government statement, says this assurance follows a call from the delegation seeking an immediate action from the Democratic Coalition for Change Government for the implementation of the proposed international seaport.

The statement says the Prime Minister commends the delegation after learning all concerned landowning tribes on the project site have reconciled and eagerly await the project implementation.

Prime Minister adds the attitude of the concerned tribes towards the development is a step in the right direction as they already made the decision to accommodate the proposed international seaport on their land.