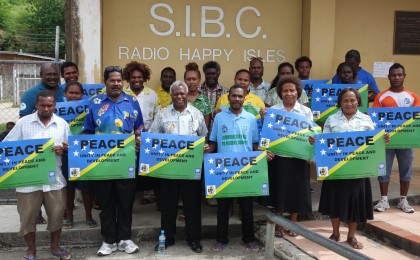 The Ministry of National Unity, Reconciliation and Peace has successfully conducted a reconciliation ceremony between the Guadalcanal Liberal Front and Isatabu Freedom Movement at Kuma Community High School, South Guadalcanal.

SIBC’s Stringer in South Guadalcanal Nathaniel Manu reports, yesterday’s event is intended to resolve ex-combatants differences along the coast between Haliatu and Sauri.

“The reconciliation program intends to resolve the differences between the former Guadalcanal Liberation Front and the former Isatabu Freedom Movement during the height of the ethnic crisis on Guadalcanal. This featured ex-combatants from Haliatu to Sauri and that is from Vatukulai to Talise ward.”

Manu reports, officials from the Ministry of National Unity, Reconciliation and Peace, leaders of the ex-combatants, church leaders, chiefs and communities in South Guadalcanal witnessed the emotional ceremony.